A few months ago it dawned on me that it would be very useful if my Acer Windows 8.1 laptop could act as a wifi hotspot, so I googled (using Ixquick) to see if someone had come up with a way to achieve that. Sure enough, there were a number of ways of doing this. On my laptop, some worked, some didn’t, some worked but the free version only ran for 90 minutes.

Connectify installed and ran perfectly, but the free version requires re-starting every 90 minutes and puts ‘Connectify-‘ at the beginning of the SSID which wasn’t exactly what I had ideally hoped for.

Wifi Hotspot Creator doesn’t see my wifi hardware, unless I right-click the icon and run it as administrator. Then it reports that there was a problem starting the connection.

MyPublicWifi didn’t work, user able to connect but unable to access the internet just like with many other ‘solutions’.

Maryfi came up with errors when attempting to start the hotspot, appears to be specifically aimed at Windows 7 and I am running Windows 8.

Virtual Access Point (Virtual AP) has a 15 day trial period for the free version. Not what I want.

At this point I have given up trying other software and have decided to use Connectify for a while to evaluate ideas and concepts, and the 90 minute timeout is bearable. As a matter of interest, the Connectify download is something like 10 MB whereas the others are between one and three, suggesting that Connectify is significantly different to the rest.

Watch this space for more info, such as whether daisy chaining two or more wifi laptops is feasible, etc.

mHotspot has just released a Windows 8 version, and it works nicely. It creates a hotspot as expected, gives you full freedom for the SSID, doesn’t seem to time out, and for the internet source I have used Ethernet and Wifi. So if you’re going to a Christmas BBQ at a friend’s place where there is only Ethernet and no Wifi, take along your laptop and an Ethernet cable and you will become very popular.

While looking around on Twitter I came across some very alarming tweets suggesting that a Syrian naval vessel sank an Israeli submarine in May, and Israel responded with tactical nukes. This might all be a load of bollocks, and the ‘tactical nukes’ may have been conventional explosives, but I’ll start collecting what info I can find and assemble a timeline.

The bill to increase New Zealand’s GCSB power has met with stiff opposition across the country. I attended a protest held in Christchurch yesterday (Saturday 27th July 2013) and last night began a ‘Security’ page on this site to share some thoughts on security related to personal internet use. 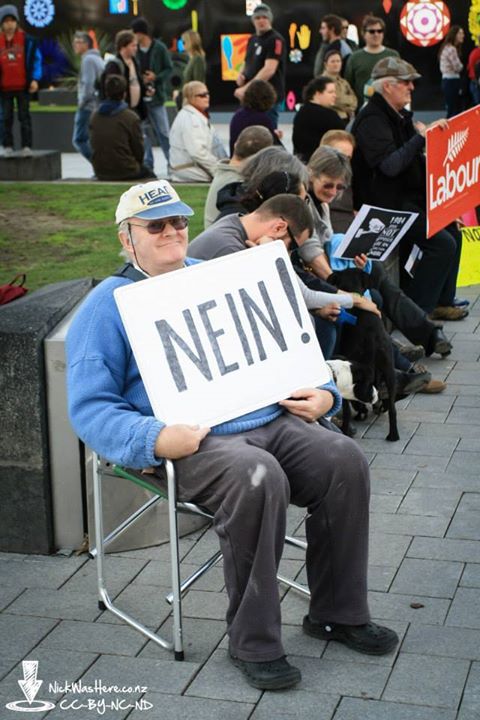 Plus a newspaper interview.

David Fraser, who came from Waipara to take part in the protest, chose to use “nein”, the German word for “no” on his placard to express his sentiment towards the bill.

“I wanted a short punchy message to make people realize this proposal by John Key is so similar to the East German Stasi [the secret police in communist East Germany during the Cold War] and before them the Nazi Gestapo where there was excessive state involvement in everybody’s privacy.

“Myself, my son, my wife, my father and grandfather all served the military to stand up for the New Zealand way of life; to stand against the likes of the Stasi and repressive regimes.”

Way back in the 1970’s, I played around with the RCA 1802 microprocessors. My project was a security system where modules in various locations could communicate with a central monitor site over a serial link. I got to the point of writing simple programs using switches and 7 segment displays and also a bit-banging 50 baud teleprinter interface, before other priorities intervened.

Recently I began looking at one or two projects that had been on my mind and while idly googling, discovered how cheap and powerful modern microcontrollers are. For example the PIC and PICAXE series. So I am currently looking around and humming and harring about the virtues of various devices. And as my research progresses I’ll try to record my findings somewhere on this blog.

This website is a New Zealand one that enthusiastically describes the PICAXE microcontroller series and got me fired up to learn more about these low cost, easy to use devices and similar ones for other manufacturers.

I’ve been at Rivendell Respite for about 24 hours now and found that it took me a little while to figure out what I really wanted to do here. I stood in front of the main bookshelves and looked for a book that might jump out and say ‘read me’ but nothing really caught my eye. Just didn’t seem to be in the mood for reading. But earlier I’d been talking about jobs I’d had in the past and I’d said that I’d enjoyed teaching in the Air Force, so reflecting on that later I realised that I was really more inclined towards imparting knowledge (i.e. teaching) via the internet on my websites and blogs. And so here I am.

The weather is really nice, sunny and warm, so I hope to go for a walk or a bike ride later in the day when things cool down a little. In the meantime I’ll take advantage of the tranquility to put pen to paper (well, fingers to keyboard if you want to be really pedantic).

Today I heard about a large earthquake (‘aftershock’?) predicted for Christchurch on September 28th, which is just over a week away, so I thought I’d sniff around the internet to try to learn more.

My thoughts? Hmmmm, seems that a variety of sources are saying similar things. But as usual with anything on the internet, your mileage may vary.

Personally I find Twitter to be the best source of immediate information about New Zealand earthquakes if you search for the #eqnz hashtag.

A comment on this blog suggested looking at Astroblog’s blog which proved to have many interesting details about recent Christchurch earthquakes. (Thanks for the tip)

Tamzin Kay (‘Spaaceweather’) has a very interesting Twitter account and associated blog which are well worth reading to gain more insight into recent Canterbury earthquakes and their triggers.

Back in 2009 when there were still a lot of AX.25 digipeaters on 144.650 MHz, APRS was becoming very popular and packet BBS activity had declined to such low levels that many areas had dismantled BBS stations. It therefore seemed logical to retain the AX.25 digipeater network on 144.650 and use it for the new APRS activity due to the decline of BBS, DX Cluster and TCP/IP and any other activities.

Earlier, when there had been significant BBS traffic on 144.650, some APRS activity had begun on the then newly-assigned 144.575 channel but most continued quite happily on 144.650 as they saw no advantage to change and were unwilling to go through the financial and red tape hassles for no logical benefit.

FMTAG Form 10 applications for ‘APRS digipeaters’ on 144.650 were stalled by NZART Council. In my opinion, these applications might have had success if they were called ‘digipeaters’ or ‘AX.25 digipeaters’ without specifying which particular AX.25 software was going to be using them.

Council asked Councillor Noel Rowe ZL3GR to prepare a report on the issue of APRS sharing other AX.25 traffic on digipeaters, and this report was no doubt very influential on Council’s decision to force virtually all AX.25 digipeaters on 144.650 to move to 144.575 with all the expenses, site visits and paperwork involved.

Although it is all spilt mik under the bridge, the fact remains that this fiasco would never had happened if NZART operated in an open and transparent manner. Why? Because ZL3GR’s report was never made available at the time by Council for members to scrutinise and comment on.

Attempts to obtain a copy of this important and far reaching report have had no success so far. See Section 8.4 of the NZART Constitution.

The ‘ZK’ AREC callsign fiasco might be another one, along with Councillor ZL2HD’s behaviour, subsequent Lawyer’s Letter and vote of no confidence.

How many other fiascos have there been? How many more will we have to put up with? How many members walk away in disgust per fiasco?

Only a radical switch to accountable, open and transparent governance can cure this fatal flaw. But how can this be accomplished? In spite of some election promises, there appears to be no will inside Council to implement this, only stubborn adherence to the failed and obsolete Secret Squirrel doctrine.

Inspired by my wife Ann ZL3TNT’s new blog I thought that I should put pen to paper here (OK OK keep your hair on, fingers to keyboard) as I’ve been very concerned about the governance of NZART for some time, highlighted by the Secret Squirrel behaviour I have become aware of in recent years.

There needs to be a radical shift from the current closed door mushroom behaviour to open, transparent and accountable governance.

The question is how can this be achieved?

There has been no indication of any progress in this direction by the existing council, in spite of election pledges by some which no doubt scored a large number of votes for them, including mine.

Wheelclamping was a topic of this evening’s Target programme on TV. Someone had removed his wheel with the clamp still attached, taken them home, removed the clamp without damaging it and had hassles from the clamping company. The end result was that clampees were advised to remove the clamps if possible, and to fight the clampers in court.

Over the years I’ve been seeing the occasional reference to collinear VHF and UHF aerials and a couple of decades ago even assembled one but ran out of time to actually use it very much. Nowadays I can see that one for PRS could be quite useful in enhancing the usefulness of the cheap and readily available PRS radios. Some googling uncovered some interesting websites, one in particular describing the author’s research and links to websites such as this one he had found useful, so it might be a good starting point for my own research.